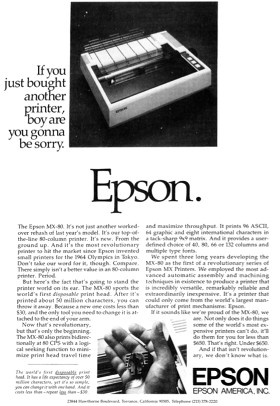 Epson MX-80 advertisement from the October 1980 issue of BYTE

The MX-80’s printer control language (later known as ESC/P) became an important standard that was supported by other printer manufacturers. It was a rare TRS-80 program that could print and didn’t support the Epson MX-80.

The TX-80 (also known as the TP-80) was a 7-pin dot-matrix printer that was primarily used with Commodore PET computers. It was demonstrated at the National Computer Conference in June 1979.

But the MX-80 was the first very popular Epson printer. Unlike the TX-80, the MX-80 was a 9-pin printer. It weighed 12 pounds and measured 14.7" wide by 12" deep by 4.2" high. It had four LED’s and three buttons on the front panel. There were also two sets of DIP switches to set rarely used parameters.

One of the most advertised features of the MX-80 was its “disposable” print head. The print head in the MX-80 was rated to last for 5,000,000 printed lines, but it could easily be replaced after it wore out. As one Epson brochure put it:

Snap the head out. Throw it away. Snap in a new one. It’s that easy.

According to Epson, a replacement print head cost less than $30.00.

One Epson advertisement described a few of the MX-80 features:

Those “64 graphic” characters mentioned were the same as the graphics characters in the TRS-80 Model I and Model III character set. The earliest version of the MX-80 (the Type I) contained the TRS-80 graphics characters, which could be enabled or disabled using a DIP switch. This made printing the TRS-80 screen on an Epson MX-80 quite easy and many TRS-80 programs relied on this feature.

Epson introduced Graftrax-80, an MX-80 upgrade kit, in 1981. Graftrax-80 included new PROM chips that could be user-installed to replace the existing chips in a MX-80 printer. It added features such as bitmapped graphics, a new italic font, and the ability to redefine escape characters. An Epson advertisement promised that for less than $100.00, the Graftrax-80 “more than doubles the features available in an Epson MX-80.”

In 1983, Epson introduced two new dot matrix printers: the RX-80 and the FX-80. The FX-80 was a more advanced printer than the MX-80, offering faster printing speeds and programmable character sets, among other features. The RX-80 was a lower cost replacement for the MX-80.