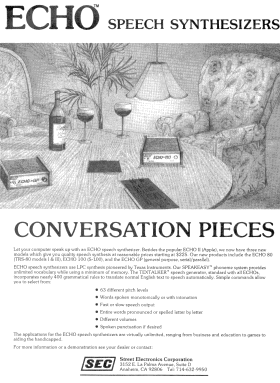 Street Electronics Corporation sold a variety of speech synthesizers with the Echo name. The Echo II, the Apple II version, was the most popular, but they also sold versions for other computers. As of 1982, there were four versions:

Either the Echo-80 or the Echo GP would work with a TRS-80 Model I or III. Both cost $299.95. As far as I know, there were no commercial TRS-80 programs that supported either the Echo-80 or Echo GP. They seem to have been primarily targeted at users who wanted to add speech to their own programs.

All of the Echo versions used the TMS5200 speech synthesis chip, which was very similar to the chip used by the Speak & Spell. Unlike many speech synthesizers, the Echo could generate speech in two ways:

Many of the parameters of the generated speech could be changed using control code sequences. These parameters, which included volume, pitch, and pronunciation mode, allowed the speech to be customized for different purposes. For example, 63 different pitches were possible, allowing the speech to range from low to high.