Wayne Westmoreland and Terry Gilman wrote some of the best games for the TRS-80 Model I and III, including classics such as Sea Dragon and The Eliminator. When Wayne Westmoreland released all of their games to the public domain in 1995, TRS-80 owners received an unexpected treat: Donkey Kong, a previously unreleased TRS-80 game.

Donkey Kong was based on the Nintendo arcade game of the same name from 1981. The hero of the Nintendo game is a carpenter named Mario (who later became better known in the game Mario Bros). The goal is to rescue Mario’s girlfriend Pauline from the marauding Donkey Kong. Mario needs to reach Pauline at the top of the screen, all the while dodging barrels thrown by Donkey Kong. Other obstacles include conveyor belts, elevators, and fireballs. 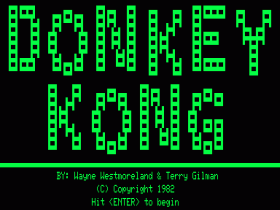 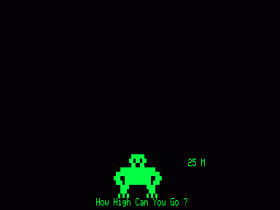 How high can you go?

The TRS-80 adaptation by Westmoreland and Gilman does a remarkable job of matching the look and feel of the original arcade game. All of the arcade screens are present, although the graphics were simplified to work in the 128 by 48 screen (Pauline in particular looks a bit blocky). The gameplay even feels the same as the arcade version. Donkey Kong also makes good use of TRS-80 joysticks such as the Alpha Joystick or TRISSTICK. 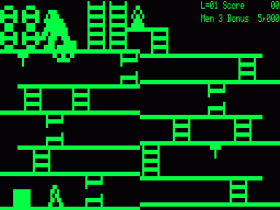 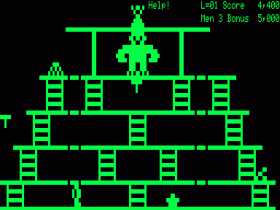 Westmoreland and Gilman wrote Donkey Kong in 1982 but never released it due to licensing problems. Wayne Westmoreland explained: “We never marketed this game because we couldn’t get permission from Nintendo, however we had so much fun writing it, we didn’t care.”

Despite its status as unreleased, Donkey Kong is a finished game and every bit as high quality as the other Westmoreland and Gilman games. It is quite possibly the best adaptation of Donkey Kong for the TRS-80. Had the licensing issues worked out, I have no doubt that it would have become a very popular game. 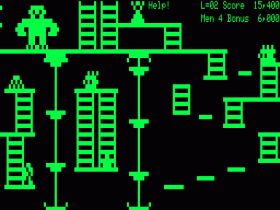 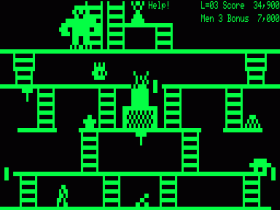 In 1995, Wayne Westmoreland released all of their TRS-80 games into the public domain. You can download Donkey Kong and all of their other games here:

While it may be true that Westmoreland’s Donkey Kong was not for sale in the 1980’s it had been technically ‘released’ amid the TRS-80 piraters.

In my High School days I would attend a Southern California user’s group meeting where a constant tension between a majority of software traders and a some of the groups morally conservative founders would battle over the purpose of the group.

The effective purpose being a place for thirty men and Model 1 and Model 3 and 4 machines running around a lab copying every bit of code they could get and fit into their disk collections.

Donkey Kong was there.

One software trader even had contacts at the time in Europe, something like the Netherlands.

There were two such groups in Southern California at the time, both run at college campuses.

Wild stuff. I’m not surprised they didn’t get permission from Nintendo for a few reasons, but particularly that Coleco had the exclusive console conversion rights and Atari had the exclusive computer conversion rights. They would have been better off offering a version for Atari and their Atarisoft label, though naturally Atarisoft never produced any TRS-80 games, so that probably wouldn’t have went anywhere either.

The other reason they probably didn’t get permission was simply due to the fact that I think – no matter how incredible the conversion is from a technical standpoint – it doesn’t necessarily present the “Donkey Kong” brand in a positive light. However, that’s naturally due to the platform’s technical limitations than the programming job.

It’s a shame they couldn’t have changed a few elements and released it as its own platform game. It would have been a nice official addition to the library, particularly at a time when major game releases were on the decline.

By the way, it’s amazing that it even included the Pie Factory level, as most home conversions didn’t have it!

Donkey Kong was truly one of the most impressive efforts in getting an arcade game ported to the TRS-80. The feat here was working within the limitations of the TRS-80’s 48-pixel high graphics screen – keeping in mind that the original used a vertical monitor for a 256-pixel vertical resolution (that’s over 5x the TRS-80) – yet still the game was not only unmistakably Donkey Kong, it also preserved the playability of the original. I’ve played versions on other 8-bit micros and consoles that weren’t anywhere near as good as this version.

As an aside, Bill mentioned the Coleco version; I’ve seen it emulated and have to say it’s quite impressive as well. Ditto for the NES version.

I had this game on my TRS-80 in the 80s! I was so lucky to have pirate relatives who were always mailing me cool stuff like this from Chicago. I wonder how they got it!

Im not entirely convinced it was never released in the 80’s or that you could only get it pirated. My dad didn’t do (and still doesn’t do) that kind of stuff. Im almost positive I played this on cassette along with Outhouse. Maybe it had another name.

It is impressive. Surprisingly the Apple ][ version has the level too (however, not being tile-and-sprite but rather dual bitmap, it’s not as torture to get working as on, say, the NES).

I had no idea this was unreleased. Before I owned a computer, a friend of mine had given me a disk for Model 3 games and I would go down to my local Radio Shack and play them. It had Donkey Kong. We would take disk editors and modify the graphics in many of these old games.

I do wonder why they didn’t just rename it. Tom Mix Software produced a great Donkey King clone for the TRS-89 Color Computer, which included all four levels. They later renamed it to The King, but it was just one of several, Kong clones sold for the machine.