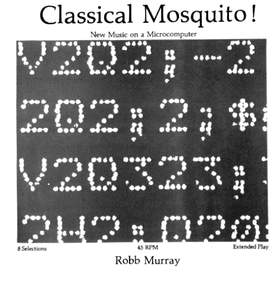 Classical Mosquito! was a record of “neo-Baroque” music played entirely by a TRS-80 Model I. It was created by Robb Murray in 1983 and was one of the earliest records consisting solely of computer generated music. The Kids' World Almanac of Records and Facts in 1985 described Classical Mosquito! as “the first commercial record made entirely by computer.”

One of the first (and most influential) electronic music albums was Switched-On Bach. That 1968 record featured classical music performed by Wendy Carlos1 with a Moog synthesizer and a heavily customized 8-track recorder. The Moog synthesizer generated all the music, but each musical element was recorded separately and combined into one performance.

Robb Murray, a computer programmer and amateur musician, developed an interest in computer generated music after hearing Switched-On Bach. When the Orchestra-80 became available for his TRS-80, he bought one and became familiar with its musical language.

Murray composed the music that went into Classical Mosquito! on a harpsichord and transcribed the notes into Orchestra-80 format. The Orchestra-80 could play four voices simultaneously, so the pieces he wrote (all original to the album) took advantage of that ability. In a review of the Orchestra-80 he wrote for the October 1981 issue of SoftSide, he described how he appreciated the rapid musical feedback:

I am a Baroque music aficionado who likes to write music. My problem has always been getting my work played. I am a slow sight reader who can’t do justice to good music on the keyboard, even to my own compositions. In the past I have gone so far as to try to recruit musicians from a chamber orchestra who would play numbers I have written, but with no luck. Now I’m using Orchestra-80, and finding musicians is no longer a major concern to me.

In his SoftSide review, he referred to the “faint, fuzzy quality that puts the unmistakable stamp of computer on these sounds.” Murray likened that quality to a “mosquito buzzing around the room,” leading to the title Classical Mosquito!.

Murray handled all the packaging, distribution, and promotion of Classical Mosquito! himself, a process he later described as “really difficult.” He spent $1200 of his own money to press 500 copies of the 45 RPM record. Despite it being an independent release, he managed to get radio stations in Chicago to play it and music stores around the country to stock it. He also took orders for Classical Mosquito! directly for $4 ($3 plus $1 for shipping and handling). Within a few months, he had sold over 300 copies.

The music on Classical Mosquito! runs around 12 minutes in total with eight tracks:

Computer generated music was a novel idea in 1983, and Classical Mosquito! generated a flurry of interest. It was mentioned prominently in the Orchestra-80 advertisements. Radio stations around the country played it and magazine articles were written about it. Robb Murray described Classical Mosquito! as having “competed for the 1984 Grammy Awards in eight categories for original record of microcomputer music.”

Robb Murray never made another computer music album, but Classical Mosquito! holds a special distinction in the history of the musical industry. Copies of the record are fairly rare today.

Quite possibly. I think it all depends on how you define the various terms. Another frequently cited candidate is Music from Mathematics, a Decca album from 1962.

For those interested, Kevin has the complete First Philadelphia Computer Music Festival album available for listening on his site, https://vintagecomputermusic.com/.