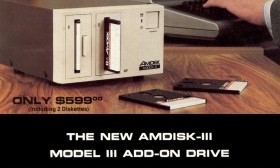 The Amdisk-III was an external dual-3″ (not 3 1/2″) floppy disk system introduced by Amdek Corporation in 1982. The TRS-80 Model III version was originally priced at $899, but that price was soon reduced to $599.00 and later $499.00. Versions were also available for the TRS-80 Color Computer, the IBM PC, and the Atari 400/800. 80 Micro tested a prototype version for the Model I, but it is unclear if that Model I version was ever sold. Amdisk also sold a single-drive system, the Amdisk-I, that was only available for the Apple II. 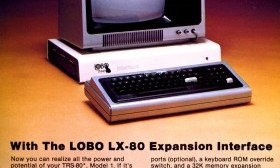 The LX-80 was an alternative to the Radio Shack Expansion Interface that took a different approach to compatibility than the competition. It was originally announced by Lobo Drives International in Fall of 1979, but problems with the supplied operating system meant that it wasn’t released until closer to 1981. The original price was $799 (without memory), although that price had been reduced to $510.00 by late 1982. Lobo Drives also briefly advertised the LX-50, but it is unclear how that differed from the LX-80.

The LX-80 unit was extremely solid (constructed of 1/8″ thick steel) and was designed to have the Model I monitor rest on top. Although more expensive than other Expansion Interfaces, the LX-80 came with an impressive set of features: 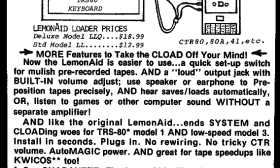 The LemonAid Loader was a device which greatly improved the ability of the TRS-80 to load programs using a CTR-80 or CTR-80A cassette recorder. It was designed by Wayne Lemons and sold through his company, Lemons Tech Services. The LemonAid Loader was available in two versions: the original which cost $12.99 (later $19.99) and a “deluxe” improved version which cost $18.99 (later $23.50). Both versions were compatible with the Model I and Model III, although cassette filtering was especially useful on the Model I.

The LemonAid Loader was described this way by a product announcement: 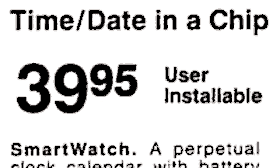 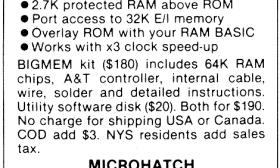 BIGMEM was a modification for the TRS-80 Model I which increased available memory. It was introduced by Microhatch in early 1982 for $180.00, but the price was reduced to $169.00 by late 1983. Microhatch also sold a utility disk (with print spooler) for $20.00 which could be bundled with BIGMEM. For any user unwilling to perform the modification, Microhatch would install BIGMEM for $199.00.

Much like the Holmes Internal Memory, BIGMEM replaced the 16K RAM chips inside the Model I with higher-capacity 64K chips. This avoided the reliability problems of the external memory in an Expansion Interface and also worked better with most speed-up kits. 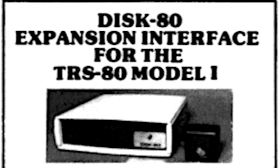 The Disk-80 was an alternative to the Radio Shack Expansion Interface that was sold by Micromint Inc. It was designed by Steve Ciarcia and was featured in his “Ciarcia’s Circuit Cellar” column in the March 1981 issue of Byte.

The Disk-80 was sold in several configurations: 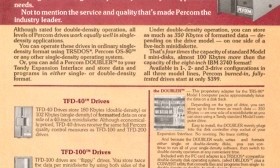 The Percom Doubler was the first successful double-density add-on for the TRS-80 Model I. It was introduced in 1980 by Percom Data Company for an initial price of $219.95. The Doubler hardware was designed by Wayne Smith and Harold Mauch (president of Percom) and the accompanying software was written by Jim Stutsman. 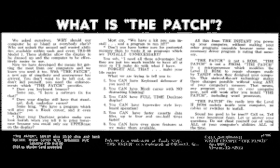 The Patch was a unique all-hardware approach to implementing lower case on a TRS-80 Model I. It was sold by CECDAT Inc. for a price starting at $69.97.

The Patch combined an ordinary lower case hardware modification with a “patch” to the Model I ROM that added a lower case driver. Probably the best description of how it worked comes from one of their advertisements:

The TRX-280 was a proposed motherboard replacement for the TRS-80 Model 4, described in the December 1990 issue of Computer News 80 and issue 38 of TRSLINK. It was created by Peter Ray of Anitek Software Products in an attempt to design a “next generation” TRS-80.

The TRX-280 design was based around the Z280, an enhanced Z80 compatible processor created by Zilog. The Z280 was an interesting chip, providing software compatibility with the Z80 yet adding many new features, such as a memory management unit, new addressing modes, and new instructions. It was also faster than the Z80 at the same clock speed.

The TRX-280 was planned as a drop-in replacement for the Model 4 motherboard (and possibly the Model III as well). It would have remained compatible with all TRS-80 software and hardware, with the one exception that it would have lacked a cassette port.

The TRX-280 had an impressive set of proposed features: 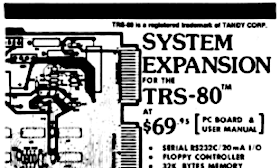