Articles in the "FAQ" Category

Just about all computer software has taken inspiration from other software that has preceded it, and operating systems are no exception. For example, it is well known that MS-DOS was based on CP/M, with some ideas borrowed from TOPS-20. Windows has strong structural similarities to VMS (both were designed by Dave Cutler). CP/M was itself inspired by TOPS-10. UNIX was inspired by Multics. And the list goes on.

For example, here are three representative characteristics present in TRSDOS and all TRS-80 operating systems derived from it:

Why was the Model I uppercase only?

One of the biggest weaknesses of the TRS-80 Model I was the lack of lowercase characters on the screen. Although that omission was hardly unique to the Model I (many computers at the time lacked lowercase, including the Apple II), it was still a notable limitation that affected many applications, especially word processing.

Steve Leininger mentioned lowercase in a talk he gave to the San Diego Computer Society in September 1977, just one month after the TRS-80 was introduced:

The TRS-80 Model I (originally known as the TRS-80 Microcomputer System) was introduced by Radio Shack on August 3, 1977. It was one of the first mass-marketed, fully-assembled microcomputers and quickly became the best-selling personal computer.

Yet despite continued demand, Radio Shack discontinued the Model I on January 1, 1981, slightly less than three and a half years after it was first introduced. The culprit was not customer demand (which remained high) but new radio interference regulations from the United States Federal Communications Commission (FCC) which took effect on that date. 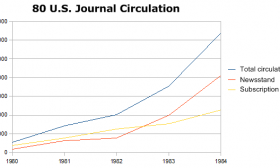 80 Microcomputing, later 80 Micro, was the most popular of the TRS-80 magazines. It was ranked the seventh fastest growing magazine in 1982 and was the third thickest magazine that year. (Those figures were for all magazines, not just computer magazines.)

80 Microcomputing began publishing in 1980, and its circulation rose steadily until it topped 124,000 readers in 1983. Circulation began a slow decline after that although subscriptions picked up slightly in 1985.

But Radio Shack showed no sign of any plans to discontinue the Model I after the introduction of the Model III. It remained in the catalog at a price $200 lower than the Model III. Jon Shirley, Vice President of the Computer Division at Radio Shack, wrote in his “View from the Seventh Floor” column in the September 1980 issue of the TRS-80 Microcomputer News: 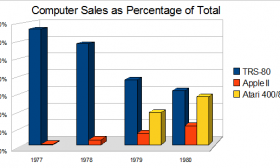 It is often stated that the Apple II dominated the computer market from its introduction in 1977 and that the TRS-80 and other competitors remained only minor players. Although often repeated, the numbers don’t bear out this assertion. Apple sold around six million Apple II’s between 1977 and 1993, but sales started slowly and built up over time.

“S-80” was a non-trademarked synonym for for the trademark “TRS-80.” It was usually used to refer to the TRS-80 expansion bus (“S-80 bus”), but sometimes it was used as an all-encompassing term for the TRS-80 and compatibles (“S-80 computers”). Other notable uses include the newsletters S-80 Bulletin (originally TRS-80 Bulletin) and S-80 Computing (originally TRS-80 Computing) and the magazine Softside: S-80 Edition.

One definition of the term appeared in the March/April 1980 issue of 80-U.S. Journal:

Was the Model I ever sold as a kit?

Some have claimed that Radio Shack offered the Model I as a kit before selling it as a fully-assembled computer. That is not true. From the very beginning, the TRS-80 was sold only fully assembled and there was never a TRS-80 kit option in any Radio Shack catalog.

Was the official name Model 3 or Model III?

Model III was the official name, although 3 and III were and are used interchangeably by many people.