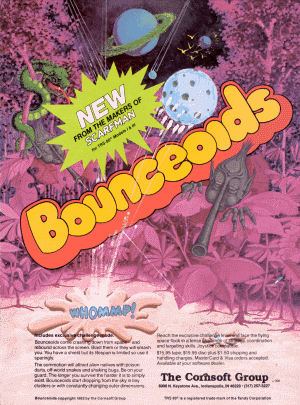 Bounceoids advertisement from the December 1982 issue of 80 Micro

There were many unofficial adaptations of the Atari arcade game Asteroids written for the TRS-80. Super Nova from Big Five Software and Planetoids from Adventure International were considered among the best.

Bounceoids (not “Bounceroids” as some sources state) was an Asteroids-inspired game written by Robert Pappas (author of Frogger and Crazy Painter) and sold by the Cornsoft Group. It took the concept behind Asteroids and gave it an intriguing twist: what if asteroids didn’t wrap around the sides of the screen, but bounced off the sides instead?

Although this might sound like a minor difference, having the asteroids bounce completely changes the gameplay. The same playing strategies that work in Asteroids (some of which also work in Super Nova and Planetoids) don’t work in Bounceoids. In particular, the movement of the bouncing asteroids means that the player must move almost constantly to avoid them. 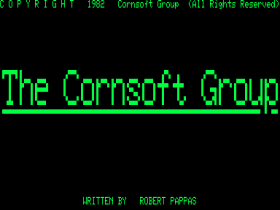 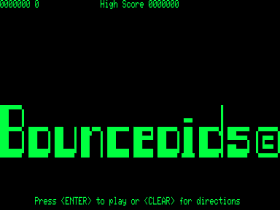 Bounceoids was described this way in a 1982 advertisement in 80 Micro:

Utilizing your newly issued class 4 annihilator, you must reduce the massive BOUNCEOID BOULDERS to cosmic dust! BEWARE! They bounce off of walls like giant pool balls, and the slightest touch means instant death! And as an added complication, terrible shaking bugs come slithering out of null space to crunch you into bug lunch! If you can prove yourself worthy, you will be challenged by the mysterious alien invaders in a nerve grinding test of incredible coordination and targeting skills. Can you live? Will you survive? 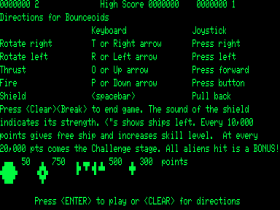 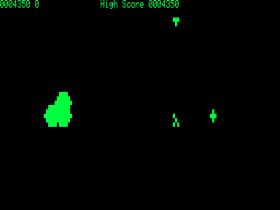 Like all of the Robert Pappas TRS-80 games, Bounceoids provides very detailed instructions. Another nice feature involves the controls. In addition to the joystick, Bounceoids supports two sets of keyboard controls. One of those sets is identical to the keys used by Super Nova.

Although Bounceoids starts out fairly easy on level 0, the difficulty (and the number of asteroids) increases rapidly. The aliens also become more numerous and more aggressive. I find the aliens that lurk at the edges of the screen and unexpectedly shoot to be particularly troublesome. Dodging both asteroids and aliens becomes very challenging very quickly.

The game level increases every 10,000 points until the maximum of level 9 is reached and the player also gets an extra life. Every 20,000 points, Bounceoids enters a challenge stage. In a challenge stage, aliens fly on screen in various formations. The aliens don’t shoot and can’t actually hit the player, but the goal is to shoot as many as possible for extra points. The challenge stages provide a welcome change from the ever increasing pressure of later levels. 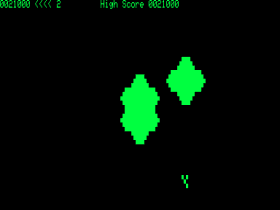 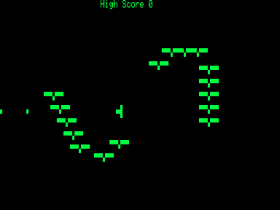 Wow! It’s been a long time since I thought about Bounceoids. My brother in law and I were totally addicted to this game to the point of sleep deprivation. I had an Atari joystick (from my Atari 2600) coupled to a handmade clone of a TrissStick interface (I was too broke to afford a real one). After a while, we reached a point where physical limitation prevented us from pressing that big orange button fast enough to blast the hordes of Bounceoids. I swear that to this day, my left thumb has abs! I found an article in one of the magazines (my memory fails as to which), and built a device that plugged between the TrissStick and the Joystick. Now that orange button produced bursts of rounds! Take that right in the challenging rounds! Haha! Hmm. Feeling nostalgic. My Model 4 still lurks in the basement. I wonder…? Grant

I always thought the Cornsoft games were top notch, and Bounceoids was no exception!