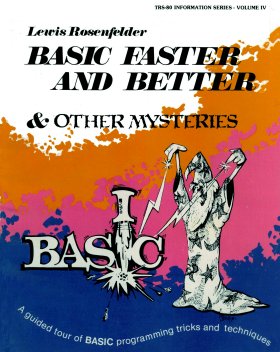 BASIC Faster and Better and Other Mysteries focuses on practical programming, specifically writing effective BASIC programs within the limits of the TRS-80 hardware. Here is a quote from the introduction:

You won’t find any trivia here. Each routine and technique solves one or more specific programs that you are likely to encounter when programming the TRS-80. Every thing we’ll discuss is pragmatic, with the goal of making the computer do what you want it to do, with the least programming effort.

Lewis Rosenfelder is a very effective author and provides a personal perspective to all the tips and techniques. The sixteen chapters in the book give some idea of the breadth of topics covered:

IJG also sold two companion disks to the book. The two disks, named BFBLIB (for library) and BFBDEM (for demonstration), contained code from the book and cost $19.95 each.

There were two other BASIC Faster and Better books: