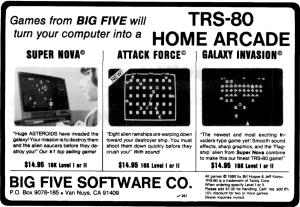 Many people remember the distinctive prelude to Attack Force, which was obviously inspired by the opening to the television show The Outer Limits. The final part of the prelude takes the video screen out of focus and makes a buzzing sound (without any audio amplifier attached). This effect is created by rapidly switching between normal and double-wide video mode, destabilizing the video synchronization on a Model I or III. The Model 4 features a more robust video system and the video just becomes fuzzy. The buzzing sound is created by rapidly toggling the cassette relay. 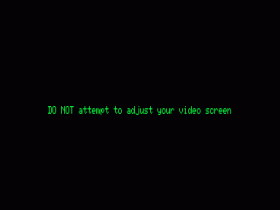 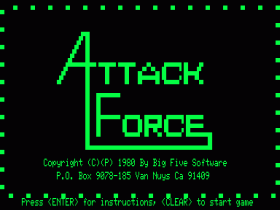 Attack Force was based on the arcade game Targ, which was released by Exidy in 1980. The playing field is made up of a 5 by 7 grid of blocks. Your task is to move your ship through the spaces between the blocks while avoiding the ramships which (not surprisingly) try to ram you. Your ship can stand still or move at two speeds. You can fire at and destroy the ramships, but they can’t fire back at you. The Flagships at the well at the right side of the screen occasionally zap one of the ramships, turning it into a clone of your ship. If you shoot this clone, you will be destroyed as well. 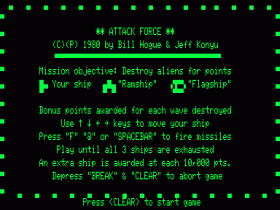 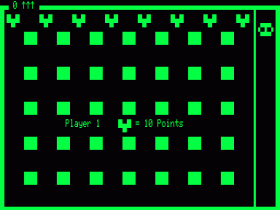 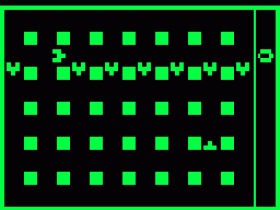 Notice the Flagship to the right 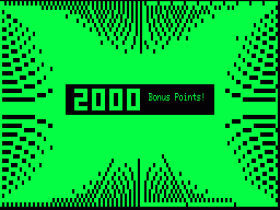 One distinguishing feature of Attack Force is the flashy transitions from one level to another. You receive these displays as a reward for bonus points.

Attack Force is a difficult game, and it becomes more difficult as it goes along. It is also one of my favorites.