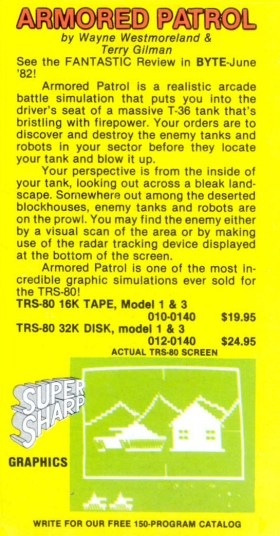 If you think you’ve seen it all game-wise, then Adventure International has a program for you! Armored Patrol is a 3‑D arcade-style game that is a definite heavyweight in the action department! Your mission is to patrol your sector and destroy all enemy tanks and robots with your tank’s high energy plasma weapon. Fueling the excitement is a realistic you-are-there perspective that lets the player view the action from the inside of his powerful T-36 tank as it prowls an alien landscape in search of the waiting enemy. Armored Patrol is packed with lots of extras, including running score tally, sound, and high score display. But the most impressive feature of Armored Patrol is the incredible graphics which create the total illusion of movement and dimension. Armored Patrol accommodates one or two players so you can share the action with a friend! 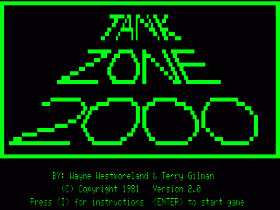 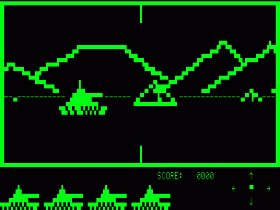 The original version of Armored Patrol, which resembled Battlezone more closely, was named Tank Zone 2000. According to Wayne Westmoreland, Adventure International requested a different name and other changes to distinguish it from Battlezone. The primary changes involved substituting houses for pyramids and robots for UFO’s. I personally think the changes were an improvement because opaque houses look much better than transparent pyramids. 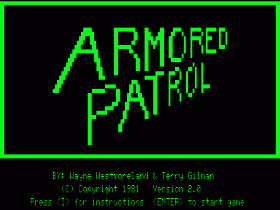 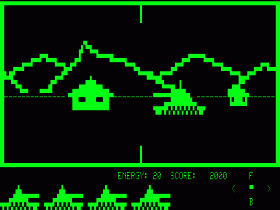 Much like the arcade game, the controls for Armored Patrol were a bit unusual. Battlezone provided two joysticks, one for each tank tread. Armored Patrol continued this idea with its keyboard controls: the left tread was controlled with the A and Z keys and the right tread with the ; and . keys. (Looking at the positions of those keys on the keyboard will make it clearer.) Although logical, those controls took a bit of practice to get used to. Armored Patrol used the joystick in a more conventional fashion; LEFT rotated left, RIGHT rotated right, UP moved forward, and DOWN moved backward.

In 1995, Wayne Westmoreland released all of their TRS-80 games into the public domain. You can download Tank Zone 2000, Armored Patrol, and all of their other games here: