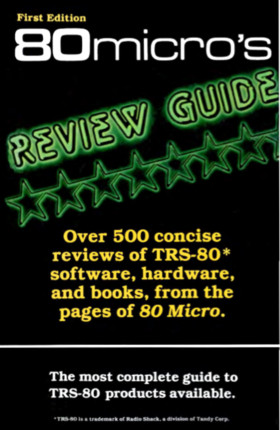 The products reviewed in the 80 Micro’s Review Guide were mostly for the Model I, Model III, Model II, and Color Computer, the computers that 80 Micro covered at the time. There are also some reviews not directly related to the TRS-80, such as for the book The Soul of a New Machine by Tracy Kidder and the music album Computer World by Kraftwerk.

One curious detail about the book is the large number of reviews for products no longer being sold in 1983. In some cases, the companies selling the product were already out of business. This was addressed in the introduction:

You might wonder why we’ve included reviews of products that are no longer being marketed. We had several reasons. First, many out-of-print programs are still available from other sources, including user groups and bulletin boards. Second, we felt that these reviews would help give computerists – particularly new ones – an overview of the market. Thus, we think you’ll find this book not only informative, but an interesting glimpse at the history and evolution of the TRS-80.

The book was identified as the “First Edition” on the cover, so there were probably updates planned. The introduction stated:

Write and let us know what you like and dislike. With your input, we’ll make future editions even more useful.

80 Micro continued publishing until 1988, but there were no more editions of 80 Micro’s Review Guide.